If you are an internet guru, you have probably stumbled across several beautiful photos of amazing places on Pinterest and similar websites while surfing your browser on one of your lazy days. And how would not you if these photos have actually become scattered everywhere? But the thing is; a lot of these photos are brushed up and underwent several modifications to look that stunning while other pictures you are just mistaken into believing that they are actually real. The truth is; the amazing places that you see on the internet every once in a while, or every day, are taken from places that exist in our world and that explains how beautiful this world can be despite all the conflicts we have been witnessing lately. This planet is full of miracles and wonderful places that are usually discovered by chance by either professional photographers or even regular persons who love capturing beauty whenever they see it.

The natural wonders that the world offers usually exist due to a variety of reasons that range from the conditions of the climate to different earthly locations. Well, knowing that there are natural wonders that exist around the world, imagine if most of them are all in one place? Yes, no exaggeration intended here; it is true, and sometimes this beauty exists in the most unusual places. One of these places is the Philippines; this underrated Asian country is a home to almost 7000 different islands, leaving you to feel overwhelmed and confused from where you should start your journey that will be the best memorable trip of your life; as a result, we have gathered the best and most attractive 10 places in the Philippines that will get your desire to travel burst into flames, check them out before planning your next Philippines travel package.

This place is deemed to be one of the world’s treasures that people believe it can be considered the eighth wonder of the world. It is one of the best places that you can visit and explore in the Philippines. Get the chance to be closer to nature and get in touch with your spiritual self. 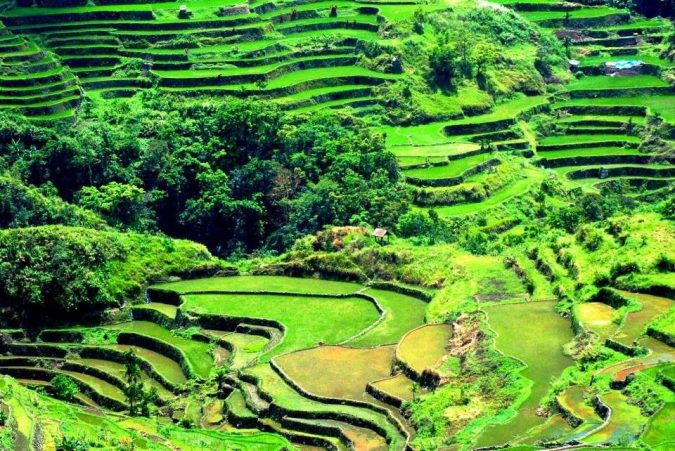 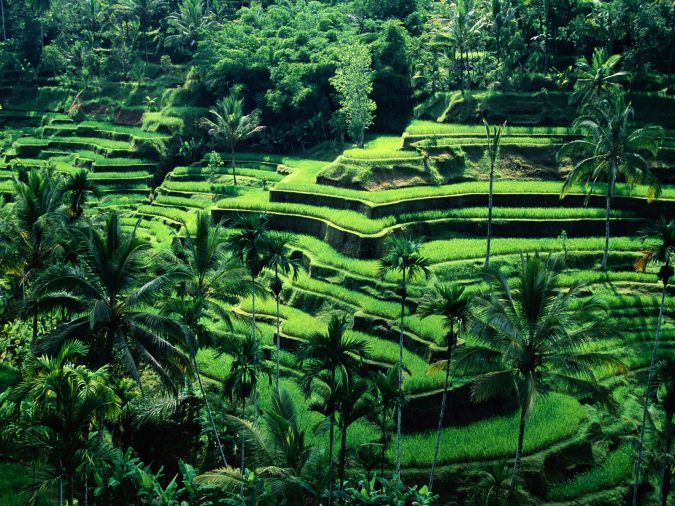 Since the Philippines is packed with almost 7000 islands, you should know that Coron Island is the third largest one among all of them, so you do not get lost wondering where you should head to. Coron Island is most known for providing great opportunities for activities like diving and snorkeling, especially because the waters surrounding the island are usually calm. This island has been ranked as one of the best islands all around the world that it has even been featured in several high-status travel magazines; besides, you choose one of the best Palawan packages and tours that include everything you need, including the tours, ticket price and accommodations. You will safely and easily land on this incredible island. 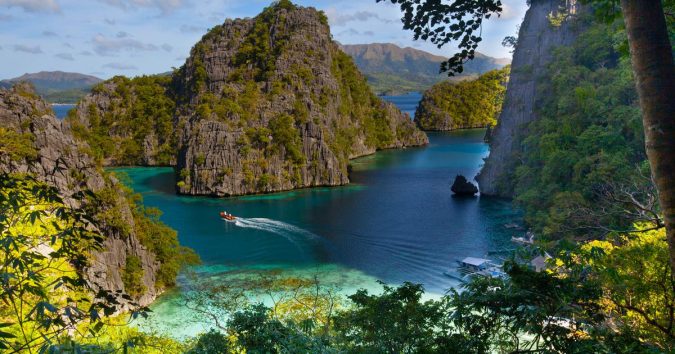 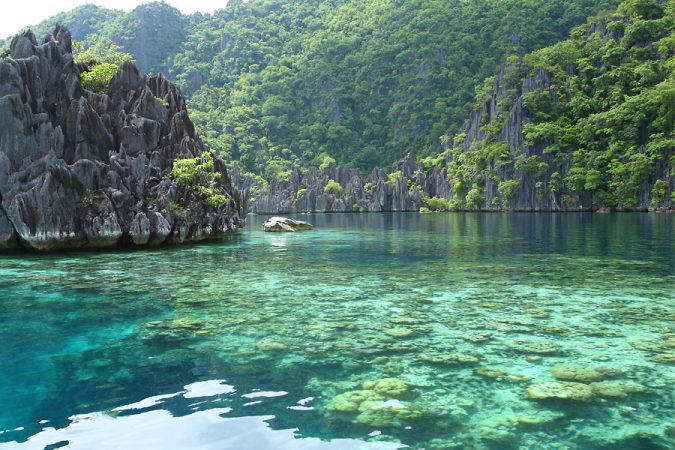 Palawan is one of the most attractive islands in the Philippines; it is an ideal place for those who are longing for a well-appointed hurried departure from the crowd and fast-paced life that we live in to enjoy a peace of mind. Palawan is known to have a lot of different islands and places that you can enjoy, but for a luxurious and heavenly haven, Huma Island should be on the very top of your destinations. On Huma Island, you can enjoy a blissful resort that is majestically embraced by the magnificent blue waters of Palawan; besides, you will be taking a nice break from the daily exhaustion of the responsibilities that life keeps throwing at your face by experiencing a sense of discovery and self-exploration. These are a lot of enough reasons for you to pack your luggage and head there, but we actually have not yet mentioned the fact that you will be served with lip-smacking meals while staying in a classy as well as cozy place. 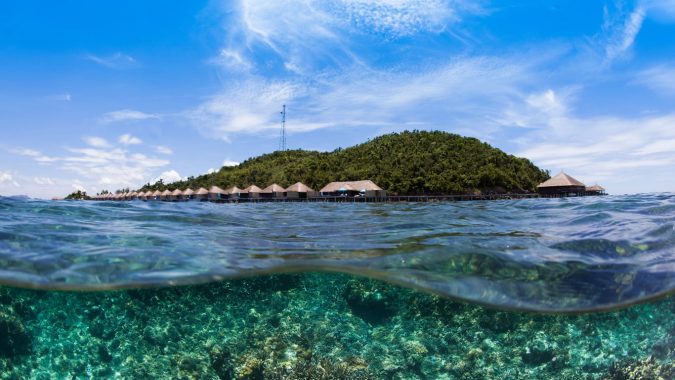 Being close to the cloud is just an extraordinary feeling that you will definitely love experiencing, won’t you? If your answer is yes, then you should not miss the Mayon Volcano; a faultlessly proportioned cone shape that rises up for more than 8000 feet above the level of the sea. It is a substantial place that attracts a lot of visitors who usually head to somewhere nearby Cagsawa ruins; a quaint spot that allows the beholders to appreciate the beauty of the Mayon Volcano. This volcano is also known to be the most active one in the whole Philippines that it erupted for a lot of times during the past 400 years or so, but, as luck could have it, it was not accompanied with destructive upshot since 1814, allowing visitors to still be able to enjoy performing a lot of different activities that include climbing, hiking, camping, and a lot more. 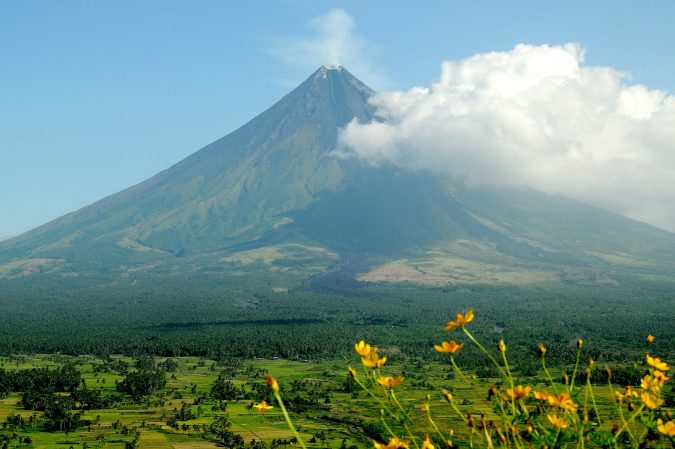 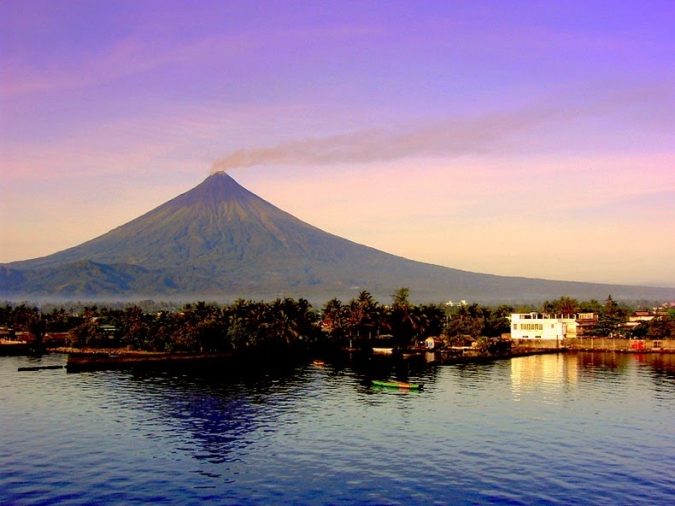 Batanes Island is deemed to be one of the most beautiful islands in the Philippines. It has been through a lot of demoralizing disasters that left the island battered and scruffy; however, it is one of the provinces that managed to survive until this day, being one of the gorgeous places in the Philippines, in particular, and in Asia, in general. It is also the least populated region, maybe because it is located on the extreme northern edge of the Philippines. Moreover, it is known as the Home of the Winds, for the weather is windy and breezy for almost all the time, besides; the island is fairly small, so people are quite familiar with each other and they are popular for being very friendly with the tourists, so you will certainly enjoy your time. 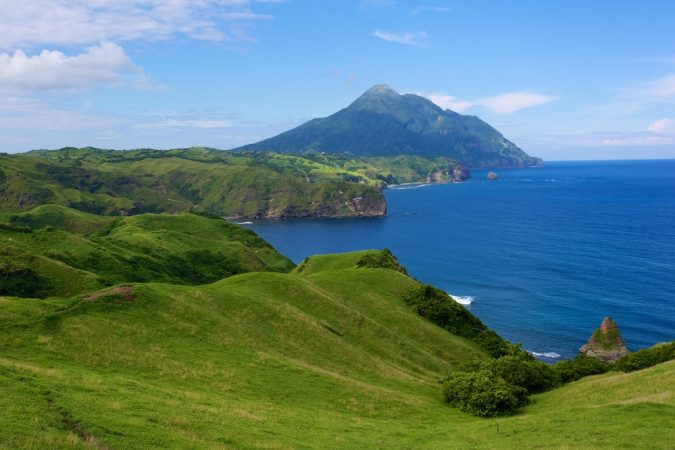 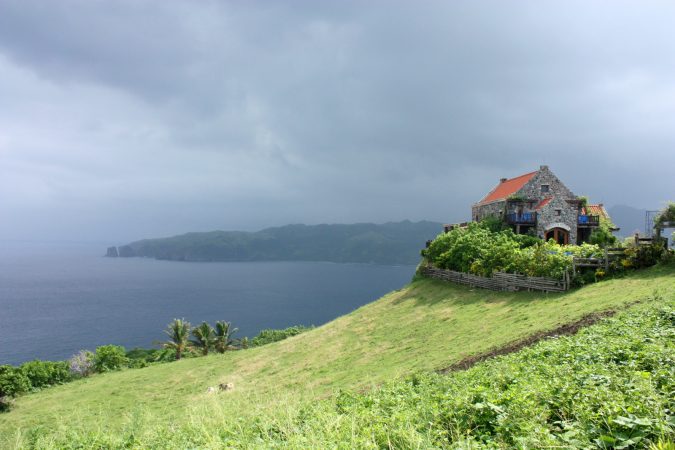 Thanks to nature and its few and far between geological formations, we had the opportunity to enjoy beholding a place as attractive as the Chocolate Hills. They are found on the island of Bohol and they are named that because there are over a thousand of dunes, covered in green grass, distributed all around the island, but that is not the only reason, but also because these moles turn into crests during the hot and dry seasons; besides, they look like a giant Hershey’s Kisses Chocolate that is almost 40 meters high. People usually ask how these giant symmetrical dunes were formed, but the folks living on the island seem to have a lot of different stories, thus we better accept the fact that only nature knows the truth and just enjoy beholding the beauty of this place. 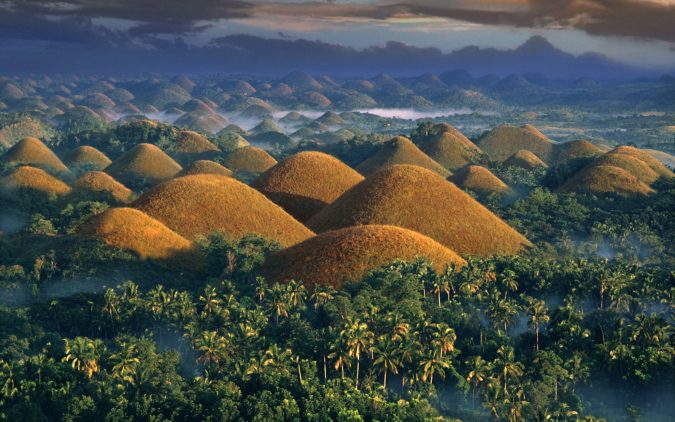 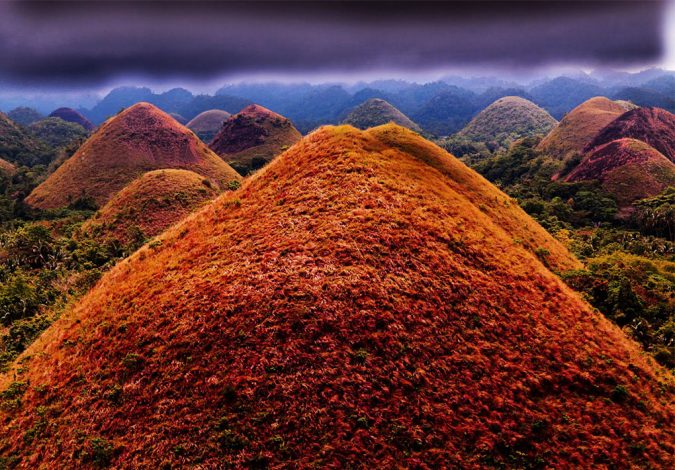 The Merloquet Falls can be found in Zamboanga and they are incredibly amazing as well as peaceful to just sit and watch; you will never get bored doing so, for the sound of the waterfalls can make your mind wander somewhere else where all the surrounding crowd will slowly fade away and the water will be the only sound you hear. Speaking of the crowd, this place tend to get very busy during the hot seasons and there is no one to blame, for it is really gorgeous, so you might think of visiting it during any other season, but if summer is the only time you got on your hands, then do not worry about the crowd because this place is surrounded by other many breathtaking areas, so people will either get distracted and leave for watching the rest of the place or you will get the chance to do so and come back when it is less crowded. 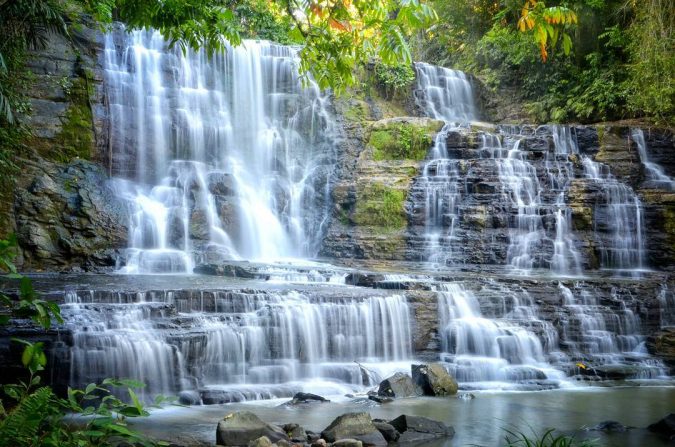 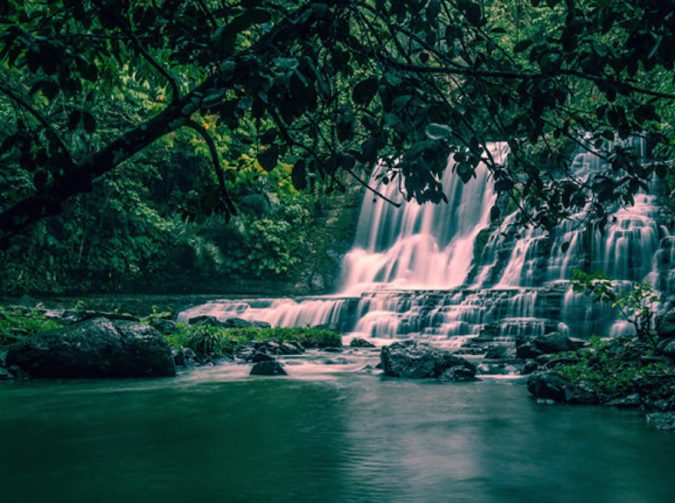 Well, since Bohol Island is mentioned for the second time on that list, then it should be a prioritized destination that you should head to as soon as you land on the Philippines. Bohol Island has a naturally made Chocolate Hills, but it also has one more amazing thing, the Mahogany Forest. However it is man-made, not naturally formed, the Mahogany Forest is an amazing place where you can either find a cool place away from the burning sun or strive for comfort all by yourself, evaluate all your thoughts and beliefs without getting interrupted by the usual daily noises of the city life. What could be more amazing than getting lost among the beautiful mahogany trees? 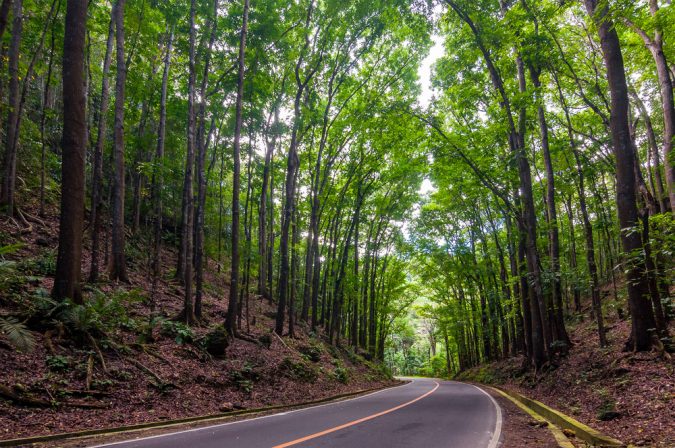 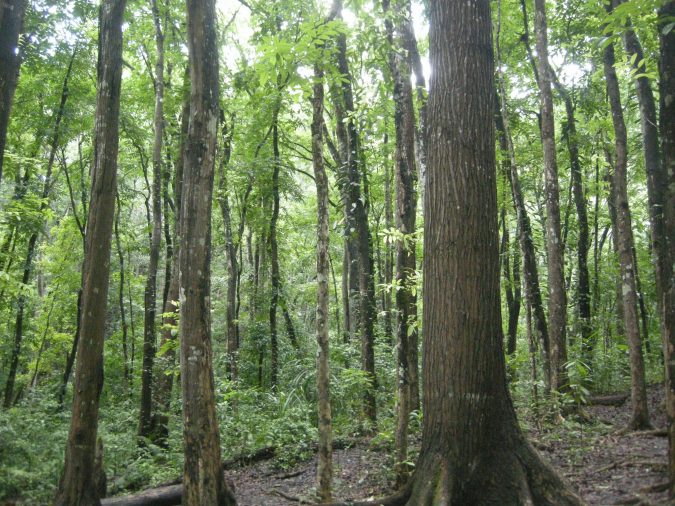 The province of Camarines Norte is surely one of the places that you should visit, not only because it includes a lot of islands, of which three are major and the others are minors, but also because it includes the most significant island of all, the Calaguas, which is actually a group of several islands. Camarines Norte as a whole is an amazing place to visit, but for being very crowded, a lot of tourists prefer heading to the Calaguas, especially because it is not of the most popular places there, so it is not that crowded and it is mostly targeted by the campers and lone travelers who want to enjoy fine white sand beaches that are found there. 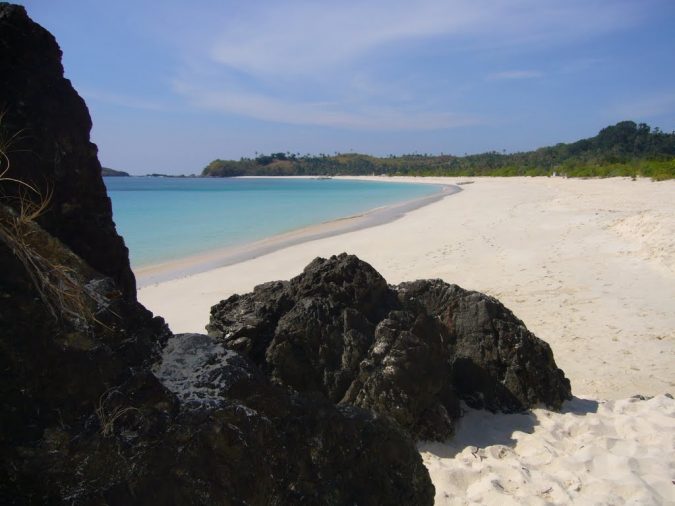 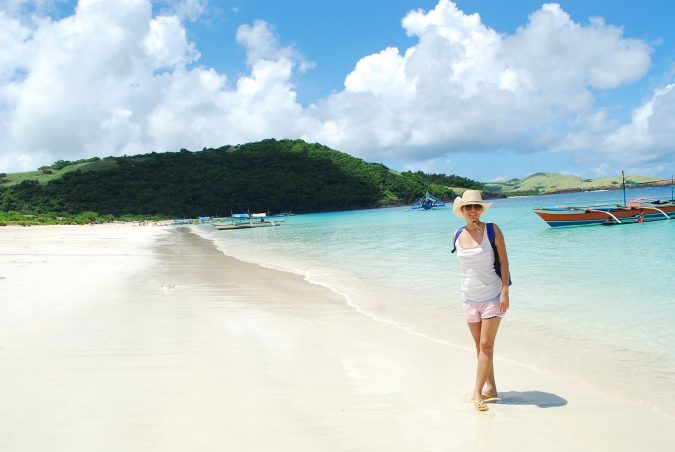 It is hard not to agree to the fact that marine life is a very beautiful one, right? Well, if you have ever felt like wanting to explore this world the closest way possible, the Tubbataha Reef should be your first destination as soon as you safely land in the Philippines. This amazing reef exists in the Sulu Sea and it is a highly protected marine sanctuary. The Tubbataha Reef consists of a fairly long waterway that extends to almost eight kilometers; this passage actually divides the reef into two islets, the North islet as well as the South one. The exquisiteness of this place has made it one of the most popular sites in the Philippines where people are allowed to dive and behold the beauty of this coral reef. This Marine Park is actually open for almost all of the hot season when the waves are quite and the waters are safe to dive in, so if your trip happens to be anywhere between April and July, you should not miss that opportunity. 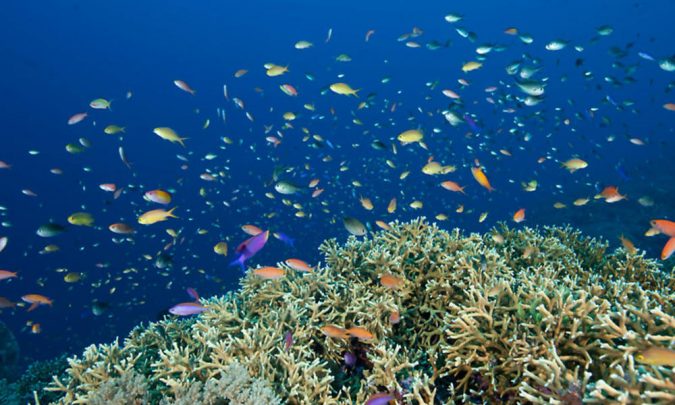 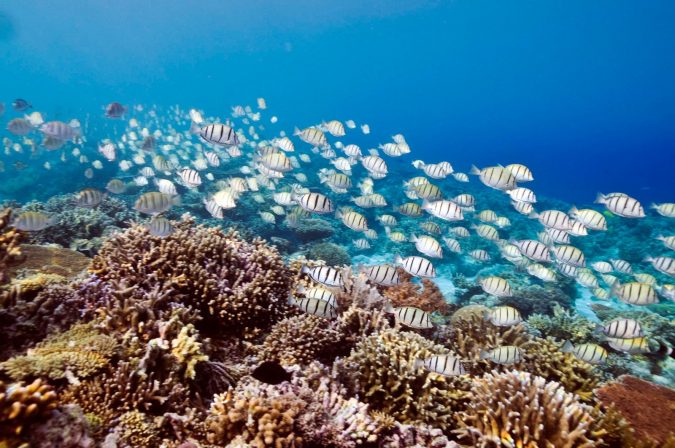 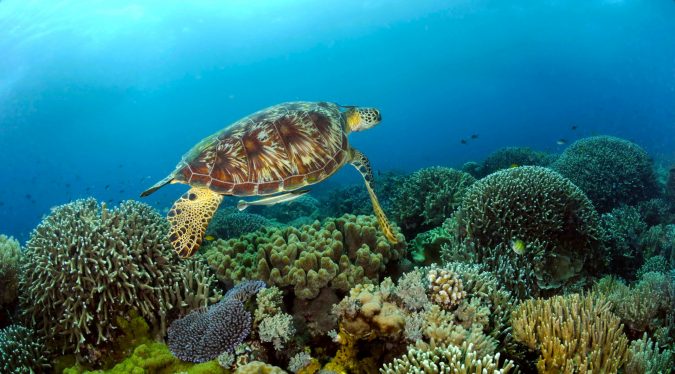 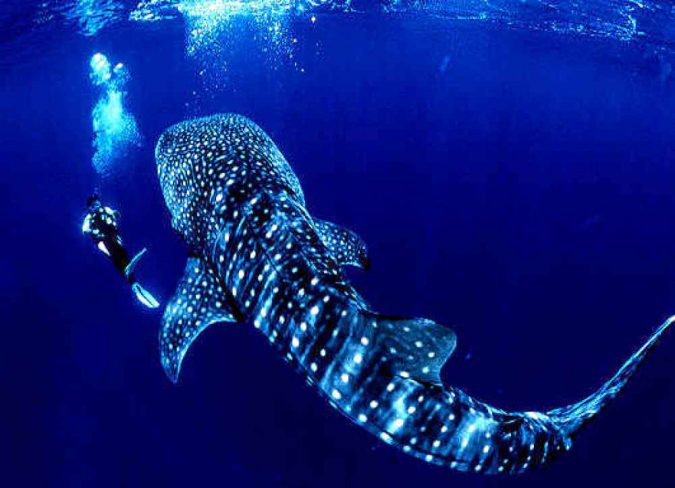