Have you ever seen animals save each other? It is a normal thing to see people cooperate and help each other especially when they encounter a problem but what about animals?. When we were still children, we used to listen to the stories that are narrated by our mothers about animals and how they help each other to teach us that we should do the same thing in our real life. But do you believe that it really happened in this real world? Yes, a frog gave a helping hand to a tiny rat in order to save it from certain death or drowning.

It is not an imaginative story, it really happened in an Indian city which is called Lucknow as a fat frog saw a tiny rat that could not swim and was drowning in the middle of a pond. The frog hurried to jump in the pond and save the tiny rat from drowning. It held the rat on its back and swam to the safe shoreline. This beautiful and unprecedented scene was watched by Azam Husain who hurried up to capture photos for these two creatures which remind us of the good virtues that we forgot and began to disappear to be replaced by other bad qualities. 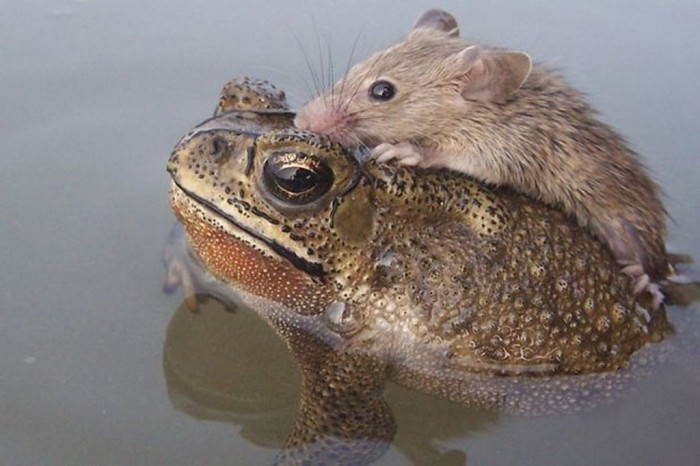 The frog and the rat seem as if they are friends who know each other and that is why the frog decided to quickly jump into the pond and save that rat’s life. The frog can be considered as a perfect example for many people who ignore others and do not think of giving a helping hand to those who are in need of help.