The Arabian Oryx is white in its color and this is why it is also called the white oryx. The Arabian or white oryx has a tufted tail, medium-sized body, two long and straight horns and is widely known for its shoulder bump. It prefers to live in steppes and deserts that can be found in different countries that are located in the Arabian Peninsula. There are many efforts that were exerted to save the Arabian oryx from being extinct. It was listed by the International Union for Conservation of Nature (IUCN) as endangered and was considered to be extinct in the wild, but the zoos and private reserves played an important role in saving this animal from danger and helped it to return back to living in the wild again. The total number of the Arabian oryx in the whole world is estimated to be approximately 7,000-8,000 individuals; more than 1,000 individuals can be found in the wild while the rest of them live in captivity in different areas around the world. 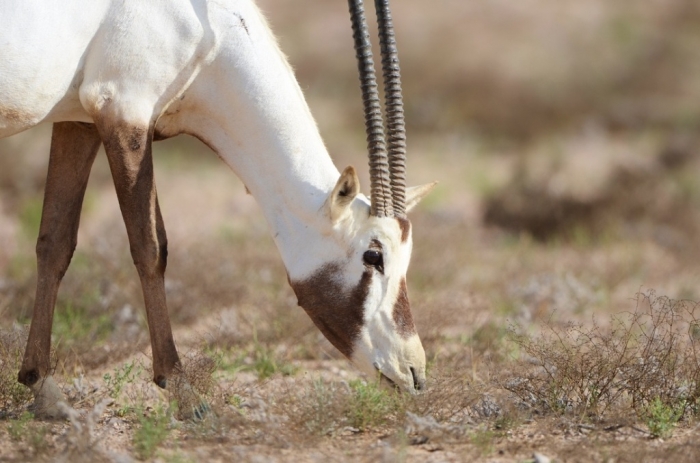 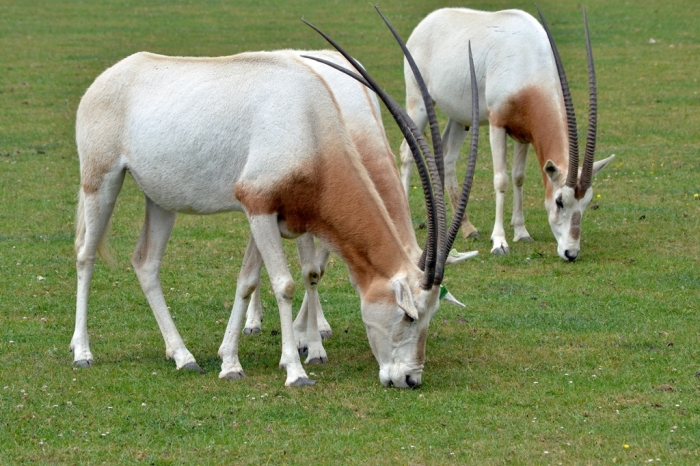 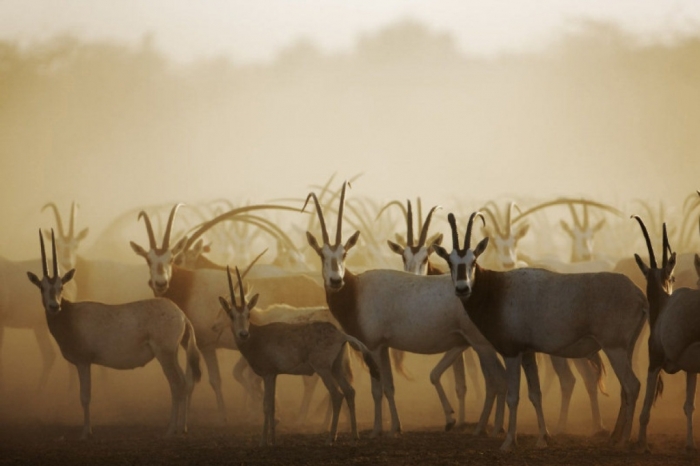 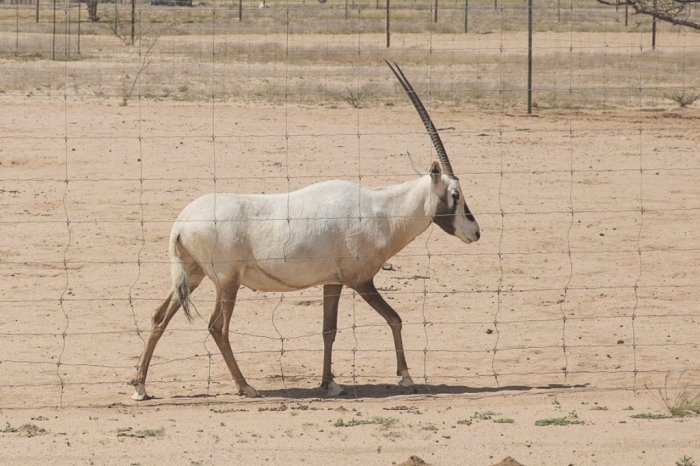 ♦ What are the characteristics of the Arabian Oryx? 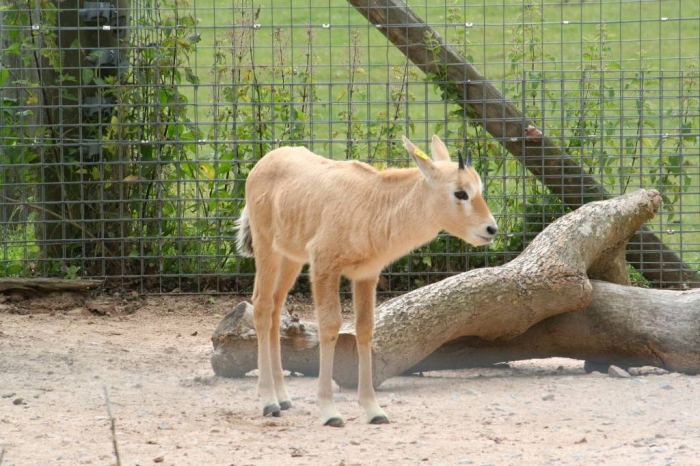 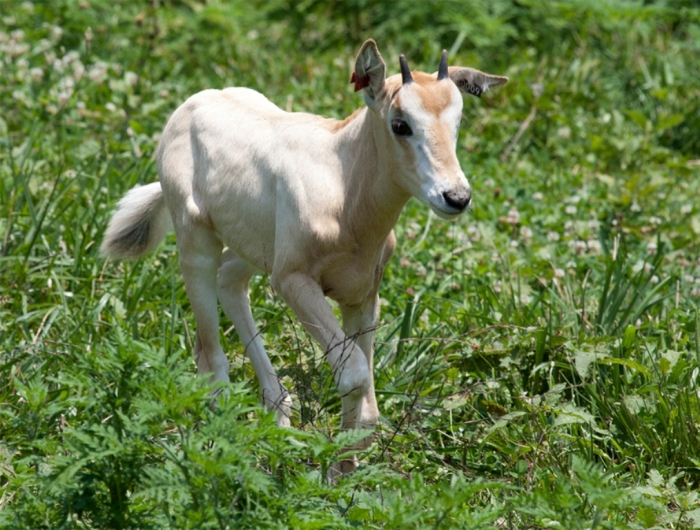 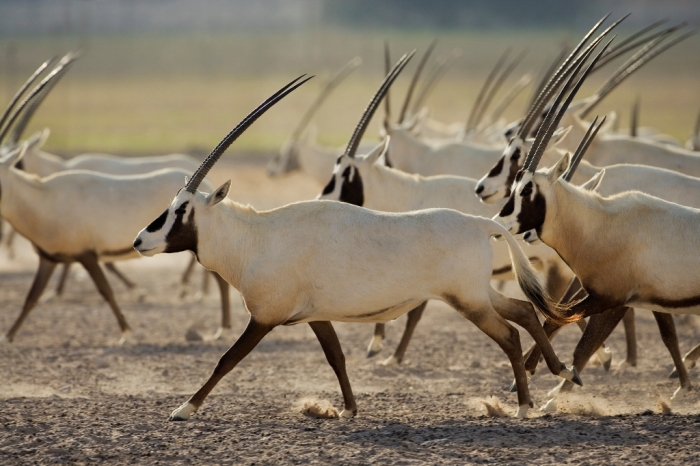 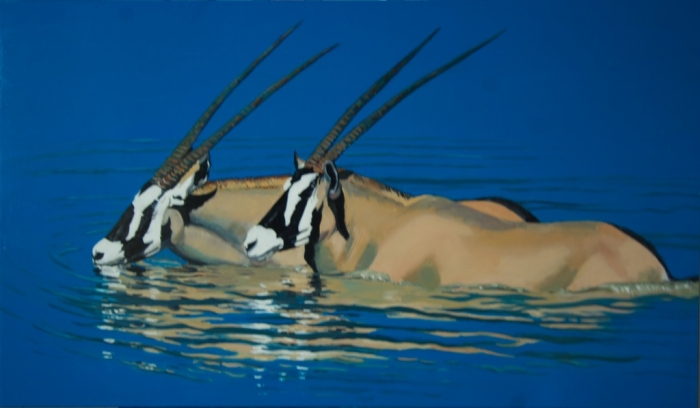 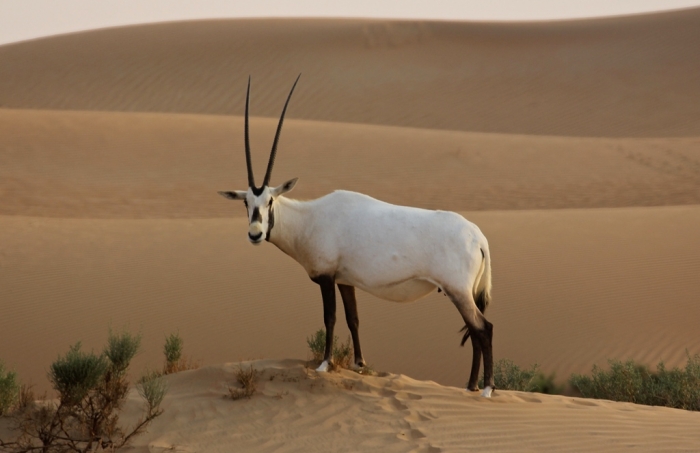 The Arabian oryx has a white coat, brown legs and black stripes on different areas of the body such as the forehead and the area between the neck and head. The Arabian oryx is approximately 1 m (39 in) high and its weight is estimated to be about 70 kg (150 lb). The two ringed horns that the Arabian oryx has are straight and very long to the extent that they can reach up to 75 cm; the height of the horns ranges from 50-70 cm (20-30 in).

♦ What are the places in which you can enjoy seeing the Arabian oryx? 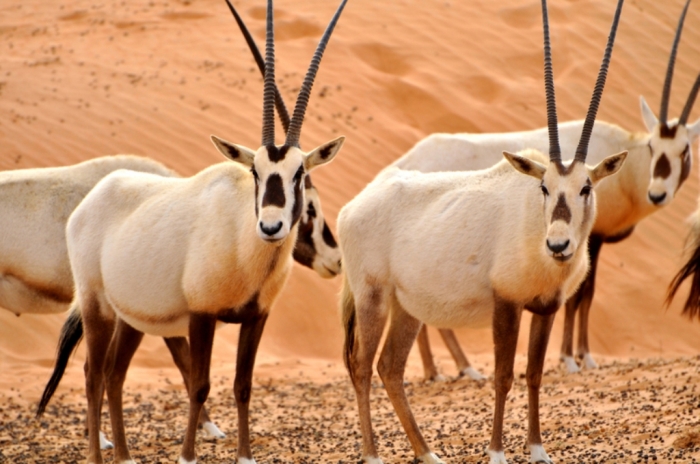 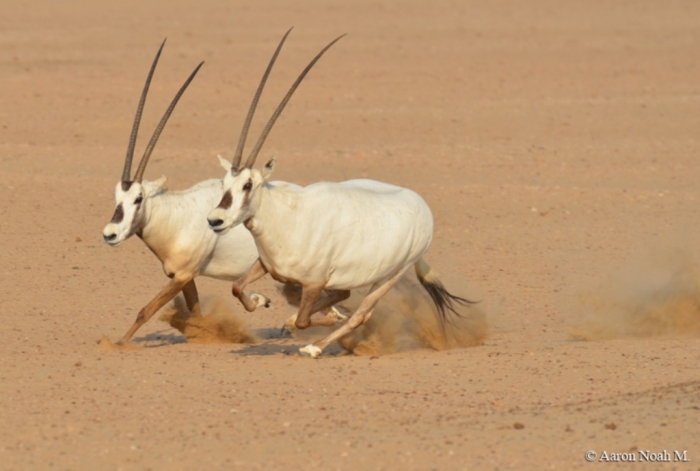 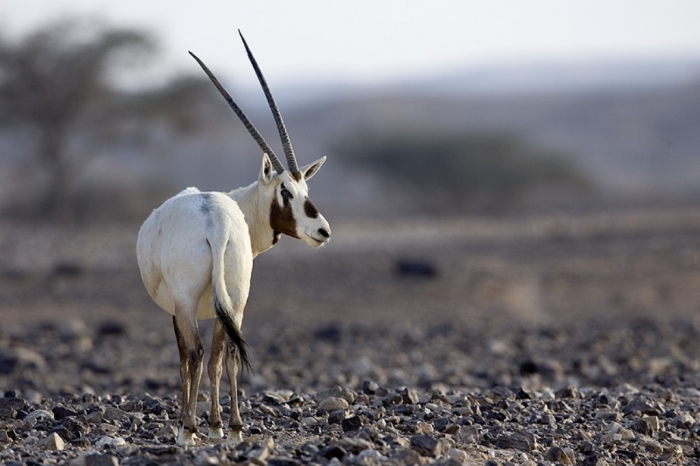 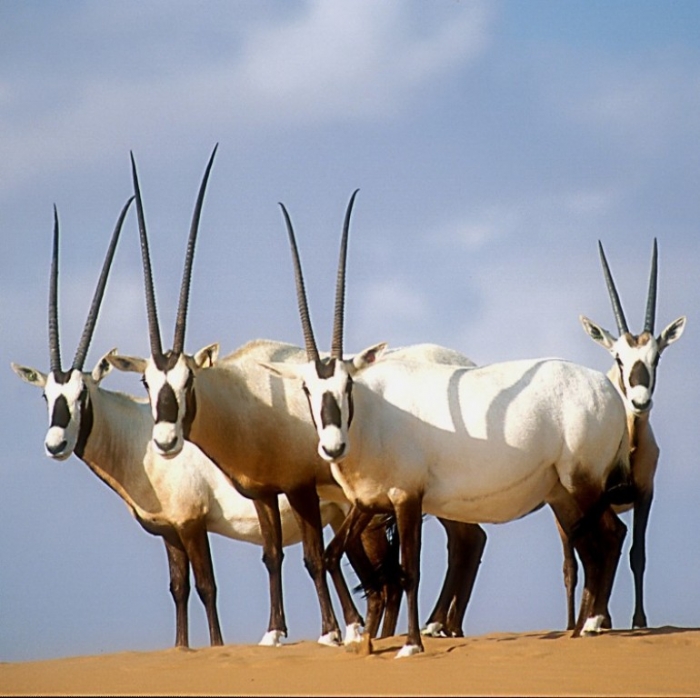 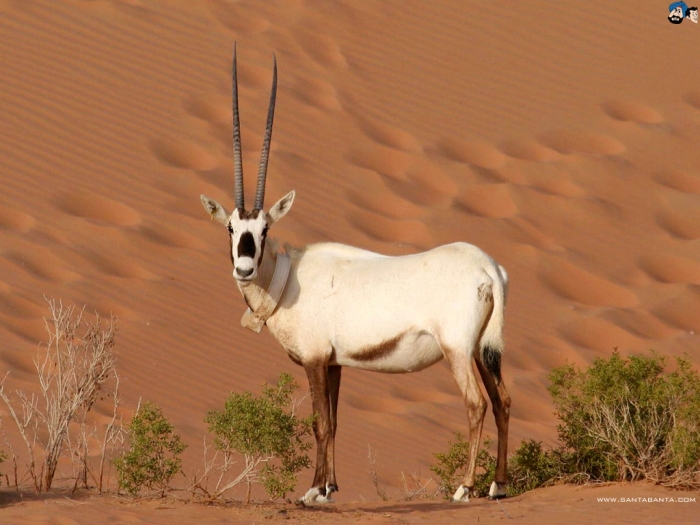 The Arabian oryx was living in different countries that can be found in the Middle East such as Iraq, Transjordan, Palestine and Sinai in Egypt. It can still be found there but in small numbers since the large number moved to the Arabian Peninsula especially in Saudi Arabia, Oman, United Arab Emirates, Jordan, Israel, Bahrain and Qatar. The best places in which the Arabian oryx prefers to live are the hard sand areas trying to protect itself and escape from its predators such as wolves and human hunters.

♦ What does the Arabian oryx eat? 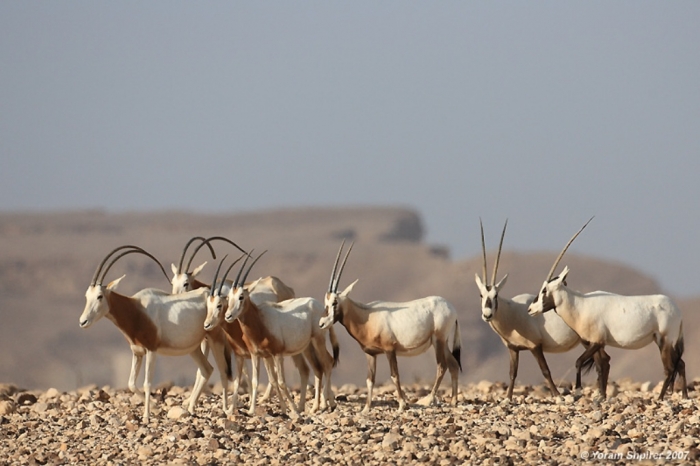 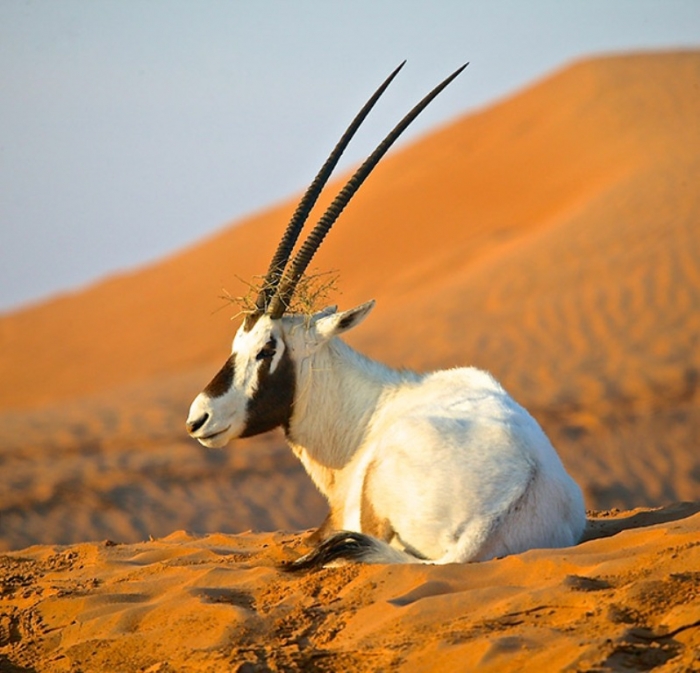 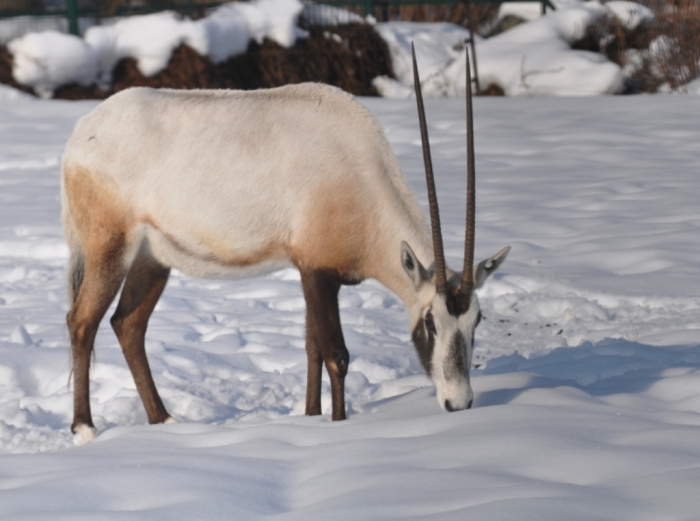 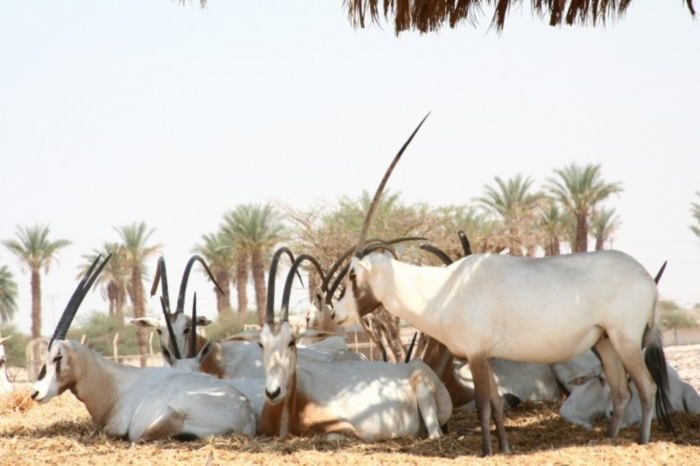 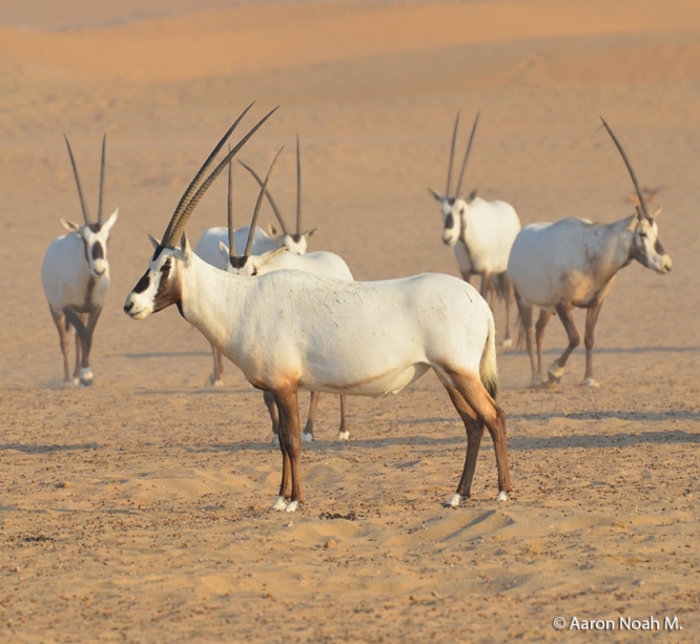 The Arabian oryx has the ability to detect rainfall and go towards it. Its food is chiefly based on grasses, but there are other types of food that it eats such as buds, tubers, fruit, herbs, trees and even roots. By following rainfall and going to the places in which there is rain, the Arabian oryx can enjoy eating new plants that grow after rainfall. The Arabian oryx can stay for a long time without drinking water and this can last for several weeks. The Arabian oryx can get the amount of water that it needs for its body through the different plants that it eats to overcome the problem of the absence or lack of water in the place in which it stays and this feature helps it to live in the desert with its extreme conditions.